How Many Gigafactories Does Tesla Have? Tesla Factory Locations

As of 2022, Tesla has seven factories located all over the world. Fremont Factory is the first manufacturing site for the Texas-based EV maker.

One of the most fascinating industry-wise transformations happening right now is in the automotive sector. Tesla, as the first lithium-ion battery car manufacturer, pioneered the rebirth of electric vehicles once again in 2008. As of last year, more than 4 million passenger battery-electric cars were sold worldwide. That is truly an enormous success led by Tesla, an American EV startup. Today, Tesla is one of the biggest electric vehicle manufacturers in the world, building variety of cars at its gigafactories.

Related Article: How Many Tesla Cars Have Been Sold?

As of 2022, Tesla has seven factories located all over the world. Fremont Factory is the first manufacturing site of the EV maker. The original “Tesla Gigafactory” Giga Nevada is where they produce lithium-ion batteries, thanks to the collaboration with Panasonic. Giga New York produces solar panels, not electric vehicles. The fourth one, the first factory Tesla built outside the US is the Giga Shanghai. This manufacturing site has been producing electric cars in China since 2019. The last two gigafactories, Giga Texas and Giga Berlin has officially started producing EVs in 2022. New Tesla factories in Austin, USA, and Berlin, Germany will help Tesla extend its lineup and double its manufacturing capacity. The latest Tesla factory is located near Giga Nevada, where Tesla has started to build Tesla Semi trucks. It is unofficially called “Tesla Semi Factory”. The final assembly place for the electric truck will probably take place in Giga Texas, when Tesla completes its production ramp-up.

Tesla’s rapid expansion shows that there sure will be a couple more Tesla factories are coming this decade.

Here is the list of current Tesla gigafactories all over the world:

Given that Tesla is an American automaker, its main manufacturing facilities and headquarters are all in the United States. Though the first Tesla vehicle, the original Roadster is not made in the US, it is mainly produced in the UK. British sports car maker Lotus was the manufacturing partner for the Tesla Roadster at that time.

Following factories are Tesla’s manufacturing facilities in the US.

Fremont Factory is the first full-featured factory that Tesla owns. It was originally constructed by the legacy automaker General Motors in 1962. Tesla bought this half-century-old facility in 2010 and then started the production of its first electric car that fully developed in-house called the Tesla Model S.

Giga Nevada is the original “Gigafactory” project that Tesla announced way back in 2014. Panasonic, the Japanese lithium-ion battery cell manufacturer, had signed an agreement with Tesla to invest in this factory, estimated to cost around $5 billion. Gigafactory officially began mass production of 2170 cells, which were jointly designed and engineered by Tesla and Panasonic, in January 2017.

Tesla’s first gigafactory has 13 battery cell production lines, as of today. The 14th line is under construction, and will probably be ready later in 2022. The cell factory is planned to reach a maximum capacity of 105 GWh cell production in the near future.

The heavy-duty electric vehicle Tesla Semi is also in the limited-production phase at a manufacturing site very close to the Nevada factory.

Giga Texas visualized like this at its opening day April 8th, 2022. It is the final design rendering of the facility.

Tesla started its fifth gigafactory construction near Austin, Texas, in July 2020. Giga Texas officially opened in April 8th, 2022. Construction was completed in almost one and a half years. Tesla Model Y is the first model that the Texas facility starts building, as pre-production has already started in 2021.

This special manufacturing facility uses giant die-casting machines called ‘Giga Press‘ to produce electric vehicles more efficiently, estimated first phase production pace is around 7,000 cars a week. It is confirmed that the Giga Texas can be able to produce one EV for every 45 seconds.

Tesla invested more than $1 billion in this production site, used more steel than the Empire State Building, and installed a dozen of cutting-edge casting machines made by the Italian manufacturer iDRA. It is expected to build not just Model Ys but also Tesla Cybertruck electric pick-up models as well. Cybertruck won’t need any paint shops, it will feature an exterior shell that serves as both chassis and body panels without any paint. Thanks to Cybertruck’s extraordinary production process, Giga Texas will probably be the most efficient auto factory in the world. 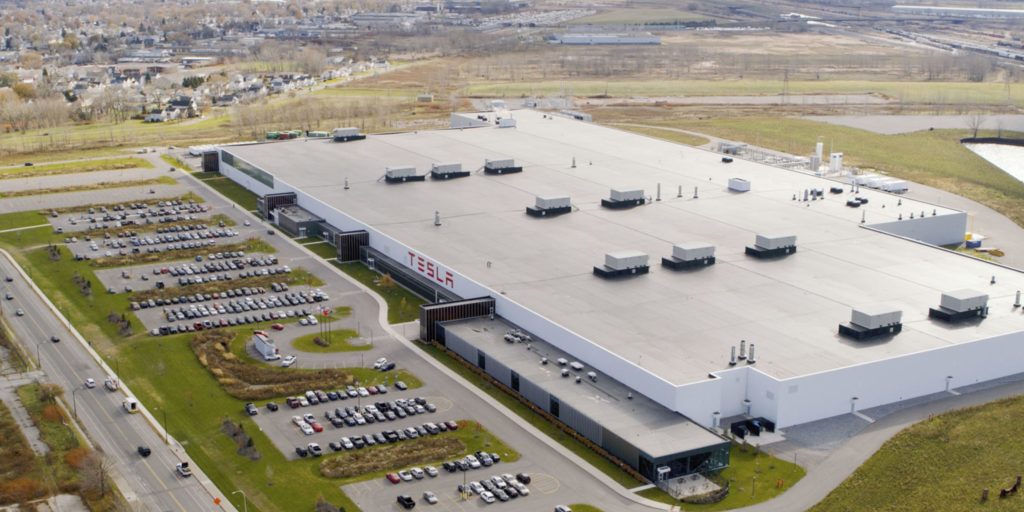 Gigafactory New York has started its operation as a solar PV cell manufacturing and Solar Roof assembly site at first, and later also started to produce Supercharger components. It is not directly involved with Tesla’s electric vehicle business.

Tesla partnered with Panasonic, yet again in 2017, to produce solar cells. But Japanese tech giant ended its involvement at the Buffalo, New York factory in 2020. Since then, Tesla has been importing the photovoltaic cells it needs from China.

Tesla Factories outside the US 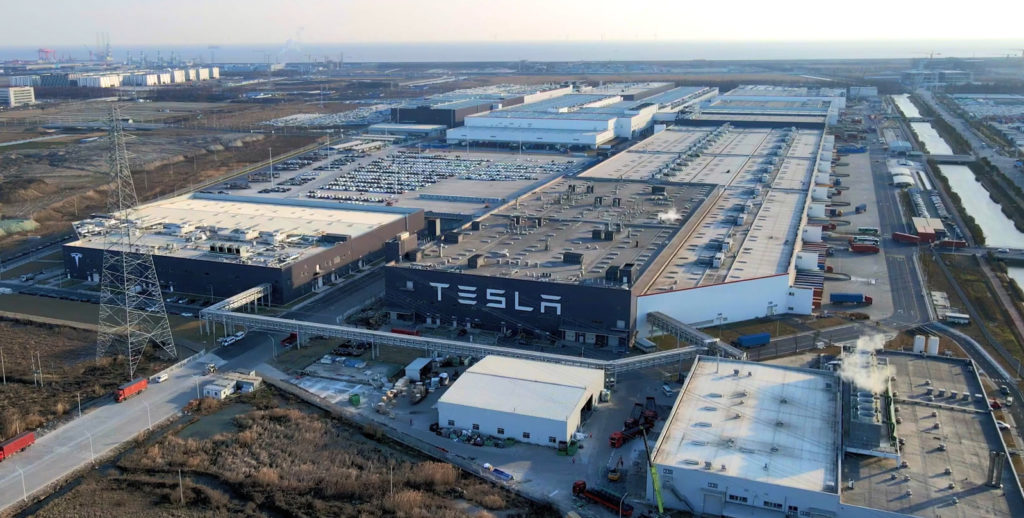 Giga Shanghai is the largest manufacturing site that Tesla built as of today. Construction started in December 2018 and ended in almost one year. Tesla wholly owns the factory, which is a first for the Chinese auto industry.

Tesla has been preparing for an expansion in Shanghai, where it will produce its $25,000 affordable electric vehicle, designed for both Chinese and European customers. The so-called ‘Model 2’ will enter mass production later in 2022 according to Chinese industry sources. Tesla will also create a new manufacturing hub near Giga Shanghai, where it will only build vehicles it will export to other countries. Shanghai will become Tesla’s largest EV export hub, thanks to the new investment plan. 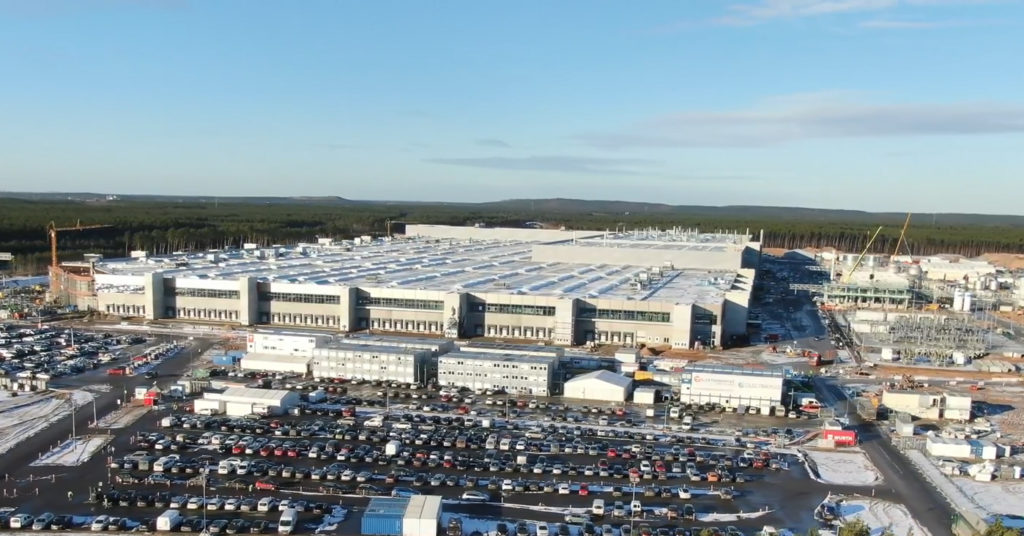 Elon Musk announced that Tesla chose Berlin, Germany as the fourth gigafactory location in 2019. The factory will produce both battery cells and electric vehicles when fully finished. Construction of the Giga Berlin started in June 2020. It officially started production in March 2022. First Model Ys made in Giga Berling were delivered to customers on 22 March 2022. Battery packs of Teslas made in Germany are currently shipped from China. Batteries, as well as battery cells, will be produced at the same facility in the near future.

The expected cost of the Gigafactory Berlin is €4 billion, according to German media. Tesla already started the construction of the battery cell production site, after finishing up with the main buildings. Texas-based company will produce its custom design 4680 cells at the Giga Berlin. The vehicles built in Berlin will feature a structural battery pack, which will help Tesla produce cars more efficiently. Gigafactory 4 is also equipped with giant aluminum casting machines, similar to Giga Texas.

Trivia fact: Giga Berlin is the smallest gigafactory that Tesla operates. But it is planned to be expanded in the near future, as Tesla already applied for a 250-acre expansion plan which will double the production capacity of the Giga Berlin.

Here is the official fly-through video of the newly opened Giga Berlin:

Canada: Elon Musk officially confirmed that Tesla is actively looking for opportunities in Canada to build its next gigafactory. Ontario and Quebec are the two main options. The company has also increased its hirings in the country. There will be an official announcement in the coming months.

South Korea: Elon Musk, yet again, publicly stated Tesla’s interest towards building a gigafactory in South Korea. Tesla’s seconds Asian factory might be located in Korean Peninsula, but the final decision isn’t made yet.

United Kingdom: Rumors were indicating that Elon Musk was in talks with the UK government to open the next European Tesla gigafactory in the UK. The country was once the preferred manufacturing location for automakers. Even though Brexit has reduced the UK’s appeal in the automotive industry, a Tesla manufacturing site in the UK is still a possibility.

India: India is the second-largest auto market in the world. The government has been struggling with the electrification of the industry, thus seeking outside help from foreign companies. Tesla is the strongest candidate for the Indian government to ally. But Elon Musk is not rushing with the idea of constructing a manufacturing site in the country, as foreign carmakers still face severe taxation, resulting in lower profitability.

Tesla is not on good terms with the Indian government lately because India has been unconvinced by Tesla’s investment plans, as a result, they don’t want to issue an exception that can ease import duties on vehicles such as Tesla’s, which will highly benefit American EV maker. Gigafactory India is not coming in the near future, that’s for sure.

Turkey: Turkey has become the most appealing location for automakers in Europe, as the local currency lost its value against foreign currencies and the labor costs dramatically decreased last year. It is expected to be one of the largest manufacturing countries in the Old Continent. With the new battery cell production sites under construction, Turkey could be the next location for Elon Musk’s Gigafactory 6.

: Rumors suggest that Russia is also on the shortlist of possible gigafactory locations. But the tension between the Russian government and the US will certainly decrease Russia’s chance to attract the world’s biggest electric vehicle manufacturer. (Update: After the Ukrainian war, Russia is no longer a viable investment option for any western company.)